What Type of Yoga Is Sivananda Yoga? 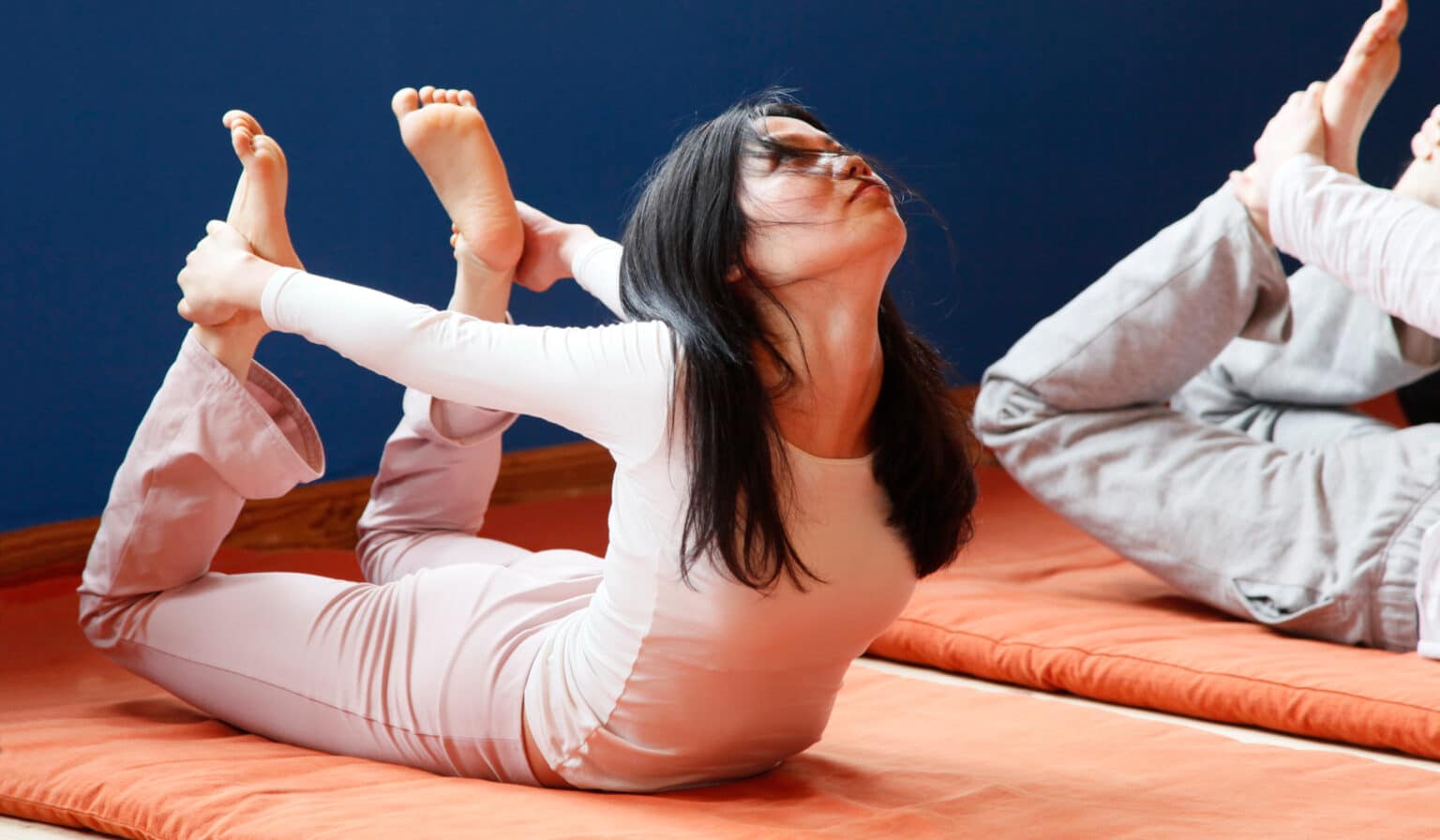 Swami Sivananda was one of the masters that shaped yoga as we know it today. Thousands of yoga teachers have been trained within his tradition, and his methods are taught worldwide. But what kind of yoga is Sivananda Yoga? In this post, I will explain his core teachings and compare them to other styles.

Sivananda Yoga is a classical type of yoga based on the teachings of ancient yoga traditions. It is one of the few contemporary yoga styles to take a holistic and spiritual approach to yoga and encourage practitioners to develop a connection with the innermost Self.

Now let’s get into detail because there is a lot more to know.

What are the origins of Sivananda Yoga?

Swami Sivananda, born in 1887, was an Indian medical doctor who decided to pursue the path of yoga as an adult. He immersed himself in the teachings and wisdom of traditional yoga and was initiated into the order of the ten names, Dashanami Sampradaya. This order of yogis had preserved the knowledge of hatha yoga since its heyday some thousand years before.

Swami Sivananda was very productive and worked tirelessly to spread the message of yoga from his ashram in Rishikesh in northern India. He became a well-known yoga master and trained several prominent teachers; some of whom were westerners.

Sivananda’s yoga spread internationally thanks to one of his disciples, Swami Vishnudevananda. He left India to teach in Canada and later created a robust organisation with centres and ashrams worldwide. Vishnudevananda’s organisation runs most Sivananda centres in the world.

Swami Sivananda also had some other prominent students. For example, Swami Satchidananda, the founder of Integral Yoga and Swami Satyananda who developed a distinct style of his own called Satyananda Yoga or Bihar Yoga.

The core teachings in Sivananda Yoga

In Sivananda centres the sun salutation is used extensively as warm up. In addition there is a base sequence of twelve classical yoga poses that beginners repeat in every class. This series of yoga poses is also known as the Rishikesh sequence.

The poses of the Sivananda base sequence:

In Sivananda Yoga, you also pay special attention to yogic eye exercises. These are  eye muscle stretches designed to keep your eyes healthy. In some cases, they can even improve your vision.

In Sivananda Yoga, proper relaxation means practising the lying down yoga pose shavasana while giving yourself relaxing auto suggestions. You do shavasana both in the beginning and at the end of classes and between groups of poses. It is a crucial pose as it assures that you assimilate energy released by other practices.

The proponents of Sivananda Yoga teach the essential health benefits of a balanced lacto-vegetarian diet. All Sivananda centres organise cooking workshops and some centres even have restaurants.

Meditation is the last crucial element in Sivananda yoga. Sivananda meditation revolves around visualisation and positive thinking. During residential courses, your day typically begin and end with half an hour of meditation. You meditate on the syllable Om or a personal mantra and in addition visualising light at the eyebrow centre or at the heart.

In addition to the five core teachings, mantra chanting is another common practice. Mantra singing can take place in yoga classes, but sessions dedicated to only singing are also typical.

Sivananda Yoga is not only about what you do in the yoga room. There is a rich community life, and those who want to can join in for karma yoga (selfless service). In addition, there is a focus on lifestyle and yoga philosophy. With a worldwide network of yoga ashrams, advanced training usually takes place during residential courses.

What are the benefits of Sivananda Yoga?

Sivananda yoga gives you benefits on many levels because of its holistic approach. It creates harmony in the body and the mind and thus boosts natural healing and induces peace.

Yoga poses remove muscular tensions, improve blood circulation and increase flexibility. You get a more significant relaxing effect than in fast, dynamic yoga styles because you do poses slowly. Thanks to breathing exercises, you activate the parasympathetic nervous system, which induces physiological relaxation. Because of the focus on pranayama, Sivananda goes a step further than many other yoga styles.

The meditations in Sivananda allow you to keep your mind healthy. Meditation makes you less involved with your thoughts. It increases clarity of mind, increases your ability to appreciate life and improves concentration. Positive thinking and visualisation can help to reprogramme your mind and nudge your life in a favourable direction.

Is Sivananda Yoga suitable for beginners?

Sivananda yoga is excellent for beginners since it is gentle and accessible. The pace of progression is slow, giving your body sufficient time to adapt.

Furthermore, this style is not overly focused on yoga poses. That gives you a complete understanding of yoga and the possibility of diving deeper into a specific practice should you desire.

Because of its focus on classical yoga poses and breathing exercises, many consider Sivananda Yoga to be a yoga style faithful to ancient hatha yoga. However, even though Sivananda yoga has a lot in common with ancient hatha yoga, it is not identical.

How is Sivananda Yoga different from Kundalini Yoga?

Sivananda Yoga and Yogi Bhajan’s Kundalini Yoga both work with methods for awakening  kundalini energy. Arousing kundalini energy was one of the main aims of medieval hatha yoga. Yogi Bhajan learnt kundalini methods from Swami Dhirendra Brahmachari whose  yoga was similar to that of Sivananda’s.

The essential difference between Sivananda Yoga and Yogi Bhajan’s Kundalini Yoga is that the latter involves Sikh rituals and mantras. It is an innovative and never before seen blend.

Yogi Bhajan’s Kundalini yoga is his creation based on a mix of Dhirendra Brahmacharis yoga, the teachings of his Sikh guru and Sufi practices. However, instead of openly admitting that he created the yoga he taught, Yogi Bhajan made up an ancient secret lineage and appointed himself as its leader.

Another difference between Kundalini Yoga and Sivananda Yoga is that Yogi Bhajan relied extensively on forceful breathing. In Kundalini Yoga, you often breathe rapidly while doing yoga poses.

The traditional kundalini practices from hatha yoga are just as present in Sivananda yoga as in Yogi Bhajan’s Kundalini yoga.

What is the relationship between Sivananda Yoga and Integral Yoga?

Sivananda yoga and Integral Yoga are closely related and similar. Integral Yoga was created by Swami Satchidananda, who was one of Swami Sivananda’s top disciples. If you are used to Integral Yoga you will feel at home in a Sivananda class.

How does Sivananda Yoga compare to Ashtanga Yoga?

Ashtanga Yoga is much more dynamic and physically demanding than Sivananda Yoga. You do poses in a flowing sequence, never staying more than a short while in each. In addition, in Ashtanga Yoga, you synchronise your movements with a particular breath, the Ujjayi breath. In Sivananda, you do most poses breathing freely.

Furthermore, Ashtanga is focused on yoga poses, whereas Sivananda Yoga is more holistic. In Sivananda Yoga, poses are just one of the five core teachings.

A similarity between Ashtanga and Sivananda is that they both pay special attention to yoga philosophy. The scriptures studied differ, though. Practitioners of Ashtanga study the Yoga Sutras of Patanjali, while the prefered philosophy within Sivananda Yoga is Vedanta.

How is Sivananda Yoga different from Satyananda Yoga?

Satyananda Yoga shares many features of Sivananda Yoga because it sprung out of the yoga that Swami Sivananda taught in Rishikesh. However, Satyananda Yoga is much more diverse, focusing on pranayama, kundalini kriyas and advanced tantric meditations.

Swami Satyananda was another one of Swami Sivananda’s top students. Having spent 12 years with Sivananda, he travelled throughout India for seven years studying with many yoga masters. Designing his own yoga system, he added many of the complementary methods he picked up from other branches of yoga.

One of my longtime students, Fred, is an ardent practitioner of Sivananda Yoga. He has done the Sivananda advanced teacher training as well as their advanced sadhana course.  At the same time, he does yoga with me in my classes in Paris and online on Forceful Tranquility.

I asked him how he thinks Sivananda Yoga differs from Satyananda Yoga (as he has learnt it from me). Fred points out the following:

How is Sivananda Yoga different from Iyengar Yoga?

Sivananda yoga is less physical, less rigorous and less focused on alignment and detail than Iyengar Yoga. In addition, Sivananda Yoga is a holistic method, while Iyengar Yoga focuses mostly on the body. Another difference is that Iyengar Yoga makes heavy use of props.

Iyengar yoga is one of the most widespread modern yoga styles. BKS Iyengar learnt yoga as a young man from his brother-in-law, the famous Tirumalai Krishnamacharya. Krishnamacharya taught him yoga to help him improve his poor health. After several years of ardent practice, he managed to get well, obtain excellent health and forge a strong and resilient body.