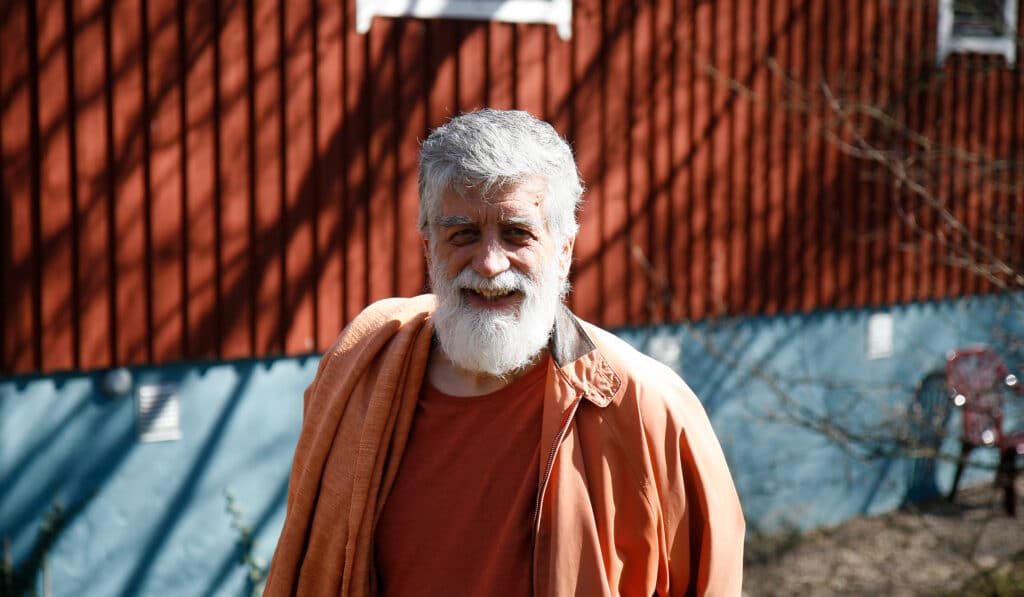 Swami Janakananda Saraswati is a yoga master and kriya yoga expert in the Satyananda tradition. For 50 years, he has been teaching advanced yoga practices in his ashram in Sweden. In this portrait of his life, you will learn about Janakanandas achievements as a remarkable yoga and meditation teacher and why his way of teaching kriya yoga is different from other approaches.

For transparency, I want to make it clear that Janakananda is my teacher. At the beginning of the 2000s, I trained under his guidance, and ever since then, I have been passing on the same yoga I learnt from him.

Now that that’s out of the way, let’s continue.

Swami Janakananada is a Danish yogi. He was born in 1939, and his early childhood was marked by the German occupation of Denmark.

According to him, he was a nervous child. His mother took him to a doctor who prescribed a relaxation exercise to calm him down. He was to lie absolutely still on his back for five minutes every day.

In essence, this was the yogic practice of shavasana. Practising shavasana daily as a child made an impression on Janakananda, and he considers this his first initiation into yoga.

After training for several years as a carpenter, Swami Janakananda got into theatre and pantomime. Together with the actors in his group, he practised yoga to get into the right mindset for acting. The lightness and energy it gave him inspired him to explore yoga further.

At this time, Janakananda got hold of a book on pranayama written by the Indian yogi Swami Narayanananda. The book described an advanced breathing exercise programme: performing the alternate breath (nadi shodhana pranayama) four times a day. The yogi, it advised, should practise at noon, six in the evening, at midnight and six in the morning.

During his years of self-experimentation, Janakananda had a transcendental experience. He says that while meditating one day, a point of light appeared. As he held onto it with his attention, it grew and revealed a tunnel. Janakananda moved through the tunnel and ended up in a new place.

“I came to a place that I can best describe as golden. I sat in front of a semicircle, or as part of a circle of meditating individuals who seemed to consist of light. I had the impression that I had been summoned there for a certain reason. What I learned was not directly expressed in words, but communicated through experiences and states.”

Janakananda describes this as an encounter with disembodied yoga masters. It was as if they taught him a meditation technique in a non-verbal fashion. He calls the method he received chid agni kriya, the flame of consciousness. It holds a prominent place in his teachings.

While reading Paramahansa Yogananda’s Autobiography of a Yogi, Janakananda had spontaneous psychic experiences he later recognised as kundalini kriyas. Reading the book made him interested in advanced yoga. Therefore, he started looking for a master to initiate him.

Swami Satyananda of the Bihar School of Yoga was a master capable of that. He came to Copenhagen, and Janakananda went to one of his lectures. He immediately felt that he resonated with Satyananda. Soon enough, he was sitting on a plane to India to participate in a three-month kriya yoga initiation course under his guidance.

After his three-month course, Swami Janakananda had planned to go back to Denmark to continue working with pantomime. However, during the retreat, he had a vivid vision that inspired him to stay on afterwards.

Janakananda spent two years in India with his teacher, who then sent him home to Denmark to teach. Swami Satyananda kept in touch with his disciple. He started coming on a regular inspection visit once a year for the next twelve years.

Since the early seventies, Swami Janakananda has passed on Satyananda’s kriya yoga to thousands of people. He has done it with rigour and tirelessness.

He is one of the few who has passed on kriya yoga in the same way that Swami Satyananda taught it in the sixties. At that time, advanced hatha yoga was a prime interest of Satyananda’s. He taught it during long retreats, and Janakananda brought the same course format to Scandinavia.

Janakananda’s most extended retreat is the three-month course. On this retreat, you spend five weeks warming up with yoga poses, breathing exercises and meditation. Then you are initiated into kriya yoga during 33 days of silence. At the peak of the course, you practice kriya yoga three times a day and spend a total of around 10 hours daily practising a variety of methods.

Special conditions and preparation are crucial for learning kriya yoga in depth. You could acquire the instructions and practice on a superficial and mechanical level without much warming-up. Still, you would need to fine-tune your nervous system and energy to appreciate it fully. Furthermore, you’d need to supercharge your concentration and willpower, and not least, you need to slow down.

This advanced practice opens the gates to your subconscious. It is a psychic purging in a grand style that can heal you from deep psychological wounds and illness.

In Paramahansa Yogananda’s tradition, you are initiated into kriya yoga by mail correspondence. At least the first levels. Those who learn it in this way will find it hard to grasp subtle practices, and for most, it will be superficial. Typically many get bored and give up practising.

Then, there are teachers who teach full kriya yoga in just a week or two or who teach it during evening classes in town. Those are also dead ends. Learning advanced practices without proper preparation can even have adverse effects.

I find that the five-week warm-up period during Janakananda’s three-month retreats is at the lower end of what you need to get receptive. Achieving that level of sensitivity on your own requires knowledge and dedication that very few have.

The challenge of teaching kriya yoga

Thoroughly teaching kriya yoga is demanding. When you guide a group through the psychic process brought forth by the kriyas, you become part of your students’ psychic field. Whatever states they go through, you go through as well.

I know this because helping behind the scenes in the course centre impacted me. As a helper, the impact is similar but less intense. Today, as an experienced yoga and meditation teacher, I guide the intermediate level of kriya yoga (in Satyananda yoga, it is called ajapa japa) during two-week retreats. Already initiating others into these intermediate kriya practices have a strong impact on me.

When I lived in Swami Janakananda’s ashram, it was evident that he was sometimes suffering. On every three-month course, there were days he promised himself never to teach another one. Luckily he never kept that promise.

Satyananda did get tired of teaching kriya yoga and gave it up altogether. He stopped in the middle of a retreat and sent his students home, complaining that they were not ready. After that, kriya yoga lost importance within the Bihar School of Yoga. Nowadays, it is mainly limited to books or taught as a lighter version of the original teachings.

Janakananda, on the other hand, has carried on teaching it in the robust way he received it. At the time of writing, he has taught it for 50 years. Much longer than his master ever did.

Doing what Janakananda has done takes tremendous willpower, dedication and focus. Having given so many ordinary people the opportunity to experience advanced yoga in depth is an achievement.

In the early seventies, Janakananda and his yoga teachers started organising their retreats at Haa Retreat Centre. It was a closed down countryside school that Janakananda bought.

Bit by bit, the centre was renovated and transformed. Janakananda’s skills as a carpenter came in handy. He initiated daring building projects that students and teachers carried out as voluntary work, karma yoga. The most impressive projects were retrofitting three existing buildings with basements dug out by hand.

In addition, being situated in the sparsely populated Swedish countryside made Haa the perfect place for Janakananda to teach advanced yoga in a calm and secluded setting.

It is fair to say that it takes a special person to accomplish what Janakananda has done. And Janakananda certainly has a personality of his own. He has buoyant energy and a way of igniting enthusiasm in others. People feel drawn to him and are willing to give him a hand with his projects.

At the same time, Janakananda is uncompromising. But not only that, he has a bad temper and quickly gets angry. He says himself that he was meek until Swami Satyananda asked him to toughen up. But people who knew him before he went to India disagree. They say he always had a will of iron and would never take no for an answer.

Early in his career, Janakananda became famous because of his fury. To his surprise, the more he barked at his students, the more people came.

In 2000, on my first course with him, he had already calmed down considerably. People tend to do so as they get older and wiser. Still, he yelled at me in front of the whole course for not listening attentively enough. It made me feel special. Out of more than forty participants, he had chosen me to set an example.

Nevertheless, Janakananda’s anger was a double-edged sword. While it encouraged concentration and attracted resolute students, it also offended less ardent practitioners. It sometimes created an atmosphere of fear in the centre that held back curiosity and spontaneity.

I think his anger has been both an asset and a burden for him.

Over the years, Janakananda has trained many competent teachers. His students have started schools and centres throughout Scandinavia, Germany, France, and other countries. Janakananda’s teachers have contributed immensely to his school, and some of them have been with him for decades.

Janakananda’s teacher training is a traditional apprenticeship. Disciples learn by working side by side with him and other senior teachers. The training is always down to earth and focused on practice. Students don’t study; they absorb knowledge.

I found that Janakananda was generous with delegating tasks and teachings. As teacher aspirants, we got much freedom in organising practical affairs. Once he felt we were ready to teach at the next level, he promoted us without delay.

Training under Janakananda’s guidance was demanding but rewarding. If you are interested, you can read about how going through the training was like for me here. >>>

A master true to his path

It isn’t easy to lead a yoga community. Most famous yoga masters in the west have failed. They have built up successful organisations and taught valuable techniques to thousands of people. Nevertheless, in the process they have become corrupt and abusive.

In fact, the way the guru-disciple model is set up and understood in the west invites corruption and abuse. Gurus in the west don’t have the checks and balances of a bigger organisation behind them. There is no accountability.

Janakananda is one of few successful gurus in the west who have managed not to become corrupt by power. Certainly, it is because of his dedication. However, I think it is also partly thanks to his personality. Because of his temperament and his unwillingness to compromise with his ideals, he has stayed true to his path all the way. Hats off!

Special thanks to Jean-François Ereau for the cover photo for this post.