The Origins of Yoga Nidra 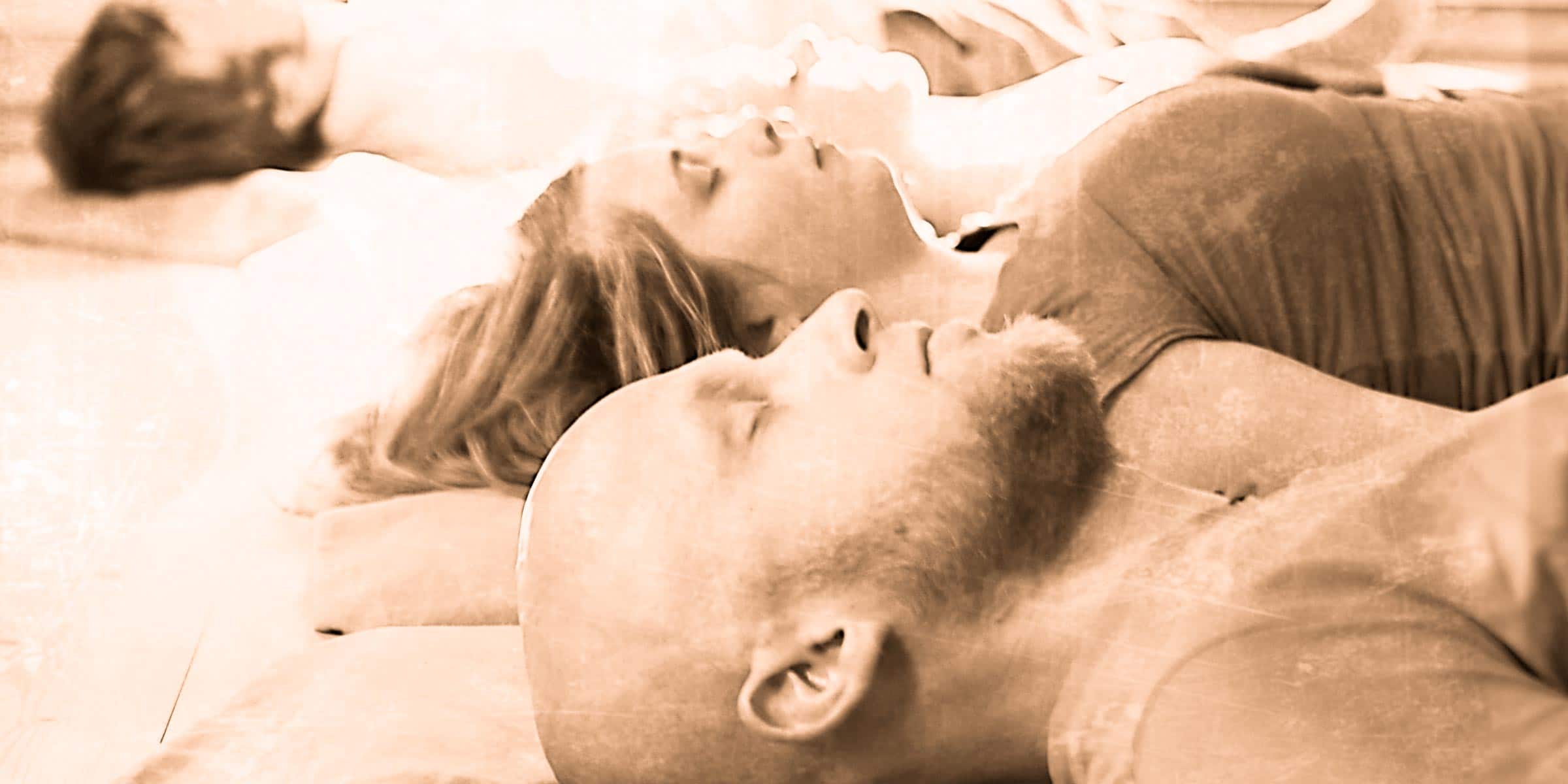 Yoga Nidra was devised by Swami Satyananda Saraswati in the early sixties and it is now one of the major meditation techniques within his tradition. Today this deep relaxation has become a mainstay practice used across many contemporary yoga styles. But in spite of its popularity, there is both confusion and controversy around the origins of Yoga Nidra.

During Yoga Nidra practice you lie on your back in shavasana, following the instructions of a guide or a recording. It involves a sequence of different techniques such as overall body awareness, rotation of consciousness through the different parts of the body, breath awareness, invocation of feelings and sensations, various visualisations, mantras and the repetition of a resolution, the sankalpa.

Some yoga teachers do not recognize Swami Satyananda as the creator of Yoga Nidra and instead believe that it is a much older practice. I have seen no evidence for such claims.

However, the term yoga nidra itself is much older. The Bihar School of yoga makes no claims of exclusivity to it. But to distinguish and protect Satyananda’s own practice, they have trademarked it Satyananda Yoga Nidra™.

Yet, there is among present-day yoga researchers doubts regarding Swami Satyananda’s sources of inspiration. As a long time teacher of this technique, I feel compelled to comment on this criticism and share my own thoughts on the origins of Yoga Nidra.

The Sanskrit word Yoganidrā is composed of two words, “yoga” and “nidrā ”, meaning yoga and sleep. According to yoga research and Sanskrit scholar Jason Birch, the meaning could be interpreted in several ways, including “the sleep that is yoga”, “the sleep caused by yoga” and “the sleep of yoga”.

Textually, the term first appears in the Mahābhārata and later in the Puranas. These early references to the term yoganidrā do not depict a technique. Instead, they are describing a particular god’s transcendental sleep and the goddess’s manifestation as sleep.

According to Birch, Saiva and Buddhist tantric texts later use the term in a context of meditation. In these texts, yoganidrā refers to a state. The text Ciñcinīmatasārasamuccaya, for example, refers to it as “peace beyond words”.

Later medieval hatha yoga texts use Yoganidrā as a synonym for samādhi (a state of deep meditation), and this meaning of the word persisted until the 18th century.

As a side note it is worth mentioning that as the role of yogic postures, asana, grew in importance, the 17th-century Hathaharatnāvalī assigns this name to an actual yoga pose, the Yoga Nidra Asana.

The origins of the modern Yoga Nidra

Swami Satyananda Saraswati, the founder of the Bihar School of Yoga, created the modern relaxation technique Yoga Nidra in the early sixties.

Swami Satyananda mastered a large variety of ancient practices. He modified some of them to fit into his own yoga system. He claims that his Yoga Nidra was derived from “important but little known practices”.

In the article “Salvation Through Relaxation”, researcher Mark Singleton argues that Satyananda overemphasizes the historical connection to tantric rituals and that Yoga Nidra instead owes many of its elements, as well as the mindset underlying them, to early 20th-century western relaxation therapy. At the time Swami Satyananda put together Yoga Nidra, these techniques had already had an influence on yoga in India. For example, Swami Sivananda, Satyananda’s guru, taught Edmund Jacobsson’s progressive relaxation.

To explore the origins of Yoga Nidra I will now dwell on each of the different elements of Satyananda Yoga Nidra and discuss their possible origins one by one.

There is an obvious resemblance in practice position between Yoga Nidra and lying down western relaxation therapy. Unlike most meditative techniques, we practice Yoga Nidra lying on the back in shavasana.

According to Jason Birch, the textual evidence for the use of shavasana dates back at least to medieval times. Birch holds that the earliest textual reference is the 12th-century Datttreyayogastra. In this text, “lying on the ground like a corpse until the mind dissolves” is depicted as a Layayoga method and not a pose. Also in the Vigyana Bhairava Tantra there is a reference to lying down as dead.

The 15th-century Hatha Pradipika later classifies this position as an asana : “Lying supine like a corpse on the ground is shavasana. It remedies fatigue and causes the mind to stop.“

Though lying relaxation might have been an established concept in the west by the early 20th century, lying down meditation was by no means new to Indian yoga traditions.

In his book on Yoga Nidra, Swami Satyananda mentions Angushtadi-Shadanga-Nyasa as a source of inspiration for one of the components of Yoga Nidra: rotation of consciousness.

Angushtadi-Shadanga-Nyasa is a tantric ritual in which Sanskrit syllables, matrikas are “placed” on different body parts. “After practising them myself I decided to construct a new system called Yoga Nidra which would incorporate the essence of these practices without having complicated ritualistic drawbacks.” Satyananda writes.

Swami Janakananda, my own teacher, insists on this connection in an article published in his periodical Bindu (“Tantra and Yoga Nidra”). He interprets this way of placing mantras as a way of becoming aware of the different parts of the body and bringing consciousness into them.

However, I have seen Indian orthodox yogis practising Matrika Nyasa myself and it does not resemble the mental rotation of consciousness in Yoga Nidra very much. They touch a body part physically at the same time as they pronounce a mantra. Matrika Nyasa, the way I understand it, is a ritual aiming at invocating the goddesses dwelling in the syllables of the sanskrit alphabet and not a meditation nor a relaxation technique.

Relaxation is not a concept from the yoga tradition

In fact, the whole concept of relaxation is absent in premodern yoga. This is a concept born within western psychology. Within this milieu, various relaxation techniques were developed to foster relaxation in the late 19th and early 20th century.

The Swiss doctor Otto Vittoz (1863-1925) developed a technique of systematically feeling the different parts of the body. Regarding the similarities between his method and the rotation of consciousness of Swami Satyananda, Dr. Singleton writes that: “one must question whether Satyananda drew directly on the Swiss therapist as much as he drew on any Indian tradition, if not more.”

Now there were also other eastern traditions that used similar techniques. One other example of a kind of rotation of consciousness is found in Vipassana meditation method. In a sitting pose, the practitioner repeatedly goes through his whole body for up to several hours at a time.

Even if Matrika Nyasa was Satyananda’s source of inspiration for rotation of consciousness, similar techniques already existed. They were in use both in the east and the west.

Another prominent technique in Yoga Nidra is awareness of the breath. This is also a generic meditation technique used for example by Buddhist and tantric traditions.

In Satyananda’s Yoga Nidra, breath awareness comes in different variations. Sometimes it is used in combination with counting or imagining that the breath happens alternately through the two nostrils, like a mental Nadi Shodana.

Tantric yoga makes heavy use of visualisations where they are typically related to the five elements, gods and goddesses and to the chakras. In this respect, Yoga Nidra can be said to build on earlier practices though the themes of the visualisations have been modernized and adapted to our times.

Localisation and visualisations of the chakras are practised in Yoga Nidra in addition to the use of mantras. These methods were also developed within the tantric yoga tradition.

Modern yoga researchers criticize contemporary yoga teachers for having superimposed western ideas and assumptions on the tantric chakras. This criticism is legitimate. The ideas about chakras presented by many present-day spiritual authorities build on creative interpretation rather than on the original concept.

Satyananda mastered a host of tantric and hatha yoga techniques dealing with the chakras. The way he originally implemented chakras in Yoga Nidra build on those ancient practices.

In Yoga the practitioner has the possibility to make a resolution, a sankalpa. This is a concept in Indian tradition dating back to the Vedas. According to the spoken Sanskrit dictionary it is “a solemn vow or determination to perform any ritual observance”. It could also be “a conception, idea or notion formed in the mind or heart”.

I myself have come across sankalpa outside of the Satyananda tradition. It was in the context of a fire ritual, a havan, with a yogi from an orthodox speaking order. Here it took the form of a wish to keep in mind while making an offering to the fire.

By the time Yoga Nidra was being conceived, a similar concept, that of affirmations, was well established in the west. Modern yogis in India had already embraced the ideas of proponents of affirmations, such as those of the Frenchman Emil Coué.

Dr. Singleton points out that many of the early masters of modern yoga in India were impressed by Coué and other western thinkers. They saw resemblances between their ideas and concepts from Indian tradition. They felt that these western authorities gave credibility to the ancient Indian masters.

Though the sankalpa is similar to Coue’s affirmations, this should not deprive it of its traditional Indian origins.

There is another dimension to the sankalpa as well. My contact with the Juna Akhara order made me aware of a dimension of yoga largely shunned in the west, that of pagan magic. In fact, magical rituals are still today important to orthodox Indian yogis. Much more so than the technical yoga practices that have become so popular in the west. The s can just as well be understood within a magical mindset as within a psychological one.

My conclusion about the origins of Yoga Nidra

When Swami Satyananda devised Yoga Nidra he built it on techniques that existed within the yoga tradition. But by depicting Yoga Nidra as a method of relaxation he consciously placed his new technique in a western narrative. He was not uninfluenced by western relaxation therapy, even if he did not draw directly on them.

Satyananda, contrary to some of his followers, never claimed Yoga Nidra to be an ancient practice. He was quite transparent with having created it himself, by modifying older practices to suit the needs and perhaps also expectations, of modern practitioners.

I see Yoga Nidra as a hybrid practice with roots booth in India and in the west, just as modern asana practice. As a practitioner and a teacher, I am comfortable with that. I prefer to judge every practice by its effects. Ancient does not necessarily mean good or better.

Having shed light on the origins of Yoga Nidra, the question is if this technique lives up to its reputation? I give you my take on that in my article about the Benefits of Yoga Nidra.

SIGN ME UP NOW!
We use cookies to ensure that we give you the best experience on our website. If you continue to use this site we will assume that you are happy with it.Ok