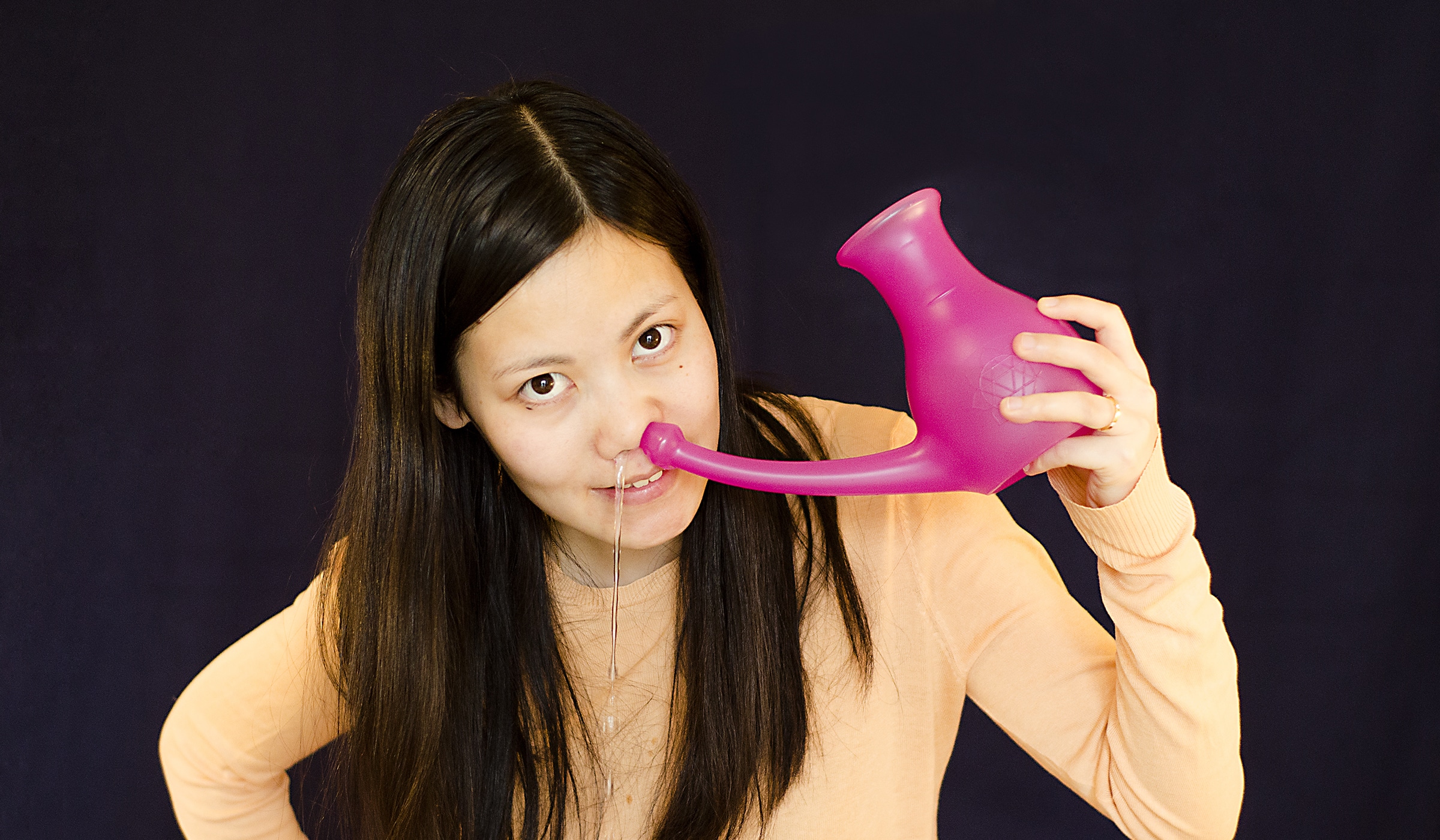 Do you have problems with recurring colds, sinusitis or allergies? Nose cleansing, or neti, is part of the cleansing processes of hatha yoga. You rinse your nose with lukewarm salt water and it helps to keep your nose in good health. It is so easy to do that everyone can benefit from it.

Numerous people use nose cleansing to relieve the common cold, influenza and allergic reactions. By regularly doing neti, it is possible to reduce the frequency of colds as well as their duration; medical studies have proved that.

The easiest way to do nose cleansing is to use a neti pot. I recommend one called NoseBuddy. Doing it is easy: while breathing through your mouth, you pour the water into your nose.

Inside the nasal cavity, there is no separation between the nostrils, so the water you pour into one nostril will flow out through the other. The water gently rinses the whole nasal cavity with the pressure from the water in the pot, removing mucus, dust and impurities. It’s refreshing, the nostrils open up, and you breathe better afterwards.

Nose cleansing in the yoga tradition

Yoga practitioners use nose cleansing to keep the nose open and in good shape. A healthy nose is essential to practising yogic breathing exercises. Neti is described in the medieval source texts of hatha yoga. In the yoga tradition, there are two versions: jala neti that you do with water, and sutra neti that you do with a waxed string. According to the Hatha Yoga Pradipika, neti develops clairvoyance and awakens Ajna chakra.

Nose cleansing is not only known to yogis, it has been prescribed more and more by medical doctors in the last few decades

Karolinska Institutet in Stockholm is the biggest university hospital and the most important centre for medical research in Sweden. A few years ago, I got the occasion to talk to professor Pär Stjärne who was at the time the head of the ear-nose-throat clinic at Karolinska. He told me that he has been recommending his patients to rinse their nose for twenty years.

The surface of the mucous membranes in the nose, sinuses, bronchus and the ear trumpet are covered with microscopic hairs or cilia. Their movements sweep the whole respiratory system to get rid of mucus dust, viruses and bacteria. It is thanks to the cilia that the nasal mucous membranes stay in good health.

As a result of continuous inflammation, the cells die, which weakens the mucous membranes to the point that they lose their capacity to self heal. But with nose cleansing, this process can be stopped. Nasal irrigation says doctor Stjärne, helps to maintain healthy mucous membranes by stimulating the growth of new cilia.

Neti also helps to maintain a favourable pH value in the nose. This is critical because if the pH value (pH means potential of hydrogen, it’s a scale that allows measuring the acid/alkaline balance) is too low then virus borne diseases can gain a foothold and bring about infections, which basically means that you get a cold.

Mucous membranes covered with cilia seen with a microscope

Neti is excellent for relieving sinusitis

The sinuses are cavities in the skull bone behind the face. When you rinse your nose, the water washes through the nasal cavity but does not enter the sinuses. I asked Professor Stjärne if he thought nose cleansing is beneficial for sinusitis.

The professor affirmed that it is beneficial, especially for chronic sinusitis. He explained that the mucous membranes in the nose and those in the sinuses are connected and communicate. A healthy nasal cavity hence influences the sinuses. In addition, it is for chronic conditions that nose cleansing is the most efficient.

Since nose cleansing decongests the mucous membranes, it also helps to keep the passages to the sinuses open. I asked if that could also contribute to better sinus health. Pär Stjärne was cautious and said though that may be the case, there had been no scientific studies to support this particular hypothesis.

According to professor Stjärne, nasal irrigation is the best way to treat nose bleed and it is preferable to cauterising the injured blood vessels. Bacteria can grow under the crust and hinder healing, but by rinsing the nose, you can dissolve the crust and rinse out the bacteria.

Naturally, neti is also beneficial for people working in an environment with a lot of dust or in polluted cities.

Breathing with the nose helps you absorb more oxygen

The nose filters the air we breathe, adjusts temperature and humidity before the air reaches the lungs. Furthermore, modern research has shown that when you breathe through your nose, you inhale nitrogen monoxide that is produced in the sinuses. This gas follows the air into the lungs and dilates the capillaries around the alveoli allowing the blood to absorb more oxygen

By making a humming sound, you can liberate and then inhale the nitrogen monoxide. Yogis do this systematically with the breathing exercises bhramari pranayama.

When you breathe through your nose, you also preserve the body’s humidity better.

Infants and small children benefit significantly from nose cleansing. However, they should not clean the nose with neti pots like adults. Instead, doctors recommend using single-dose physiological saline solutions bottles (which usually contain 20ml of water). Following the advice of our paediatrician, I and my wife have rinsed the nose of our boy’s like this since infancy. That is probably one reason they rarely catch colds.

There are no contraindications to nose cleansing

In spite of its benefits, I sometimes come across people who feel very reluctant to nose cleansing. One misconception is that by rinsing your nose, you could transfer bacteria and viruses from the nasal cavity to the throat or the ear. But this is unlikely as every day your mucus membranes move several hundreds of millilitres of fluid from your nose to your throat.

Another misconception is that neti is counterproductive for certain conditions, like ear inflammations. I asked professor Stjärne if he saw any contraindications to neti and he answered with an explicit “No, there is no reason not to rinse your nose.”

Nevertheless, it is essential to use good quality water. No need to exaggerate though. Drinking water from a tap is good enough, and it is not necessary to boil it or filter it unless you are in a place where tap water quality is not guaranteed such as in India and other tropical counties. If water quality is not guaranteed however, boiling and filtering the water is essential.

The hygiene of your pot is essential. You should rinse it after each use to avoid bacteria accumulation, and you should wash it thoroughly several times a week, preferably in a dishwasher.

NoseBuddy is my preferred neti pot. One of the many things I like about it is that it comes with a spoon that makes it easy to get perfect salt concentration every time.

When and how often should you do neti?

For a lasting effect, it is best to rinse your nose regularly. Many users incorporate neti in their daily personal morning hygiene. Others prefer to do it twice daily by doing it a second time before going to bed. When you have a cold or in the case of acute allergy, you can rinse your nose several times a day.

The salt and the salt concentration

Nose cleansing is done with a saline solution which means that the salt level in the water is 0,9%, just like in the blood. It is essential to respect this level. The neti pot that I recommend, the NoseBuddy, comes with a measuring spoon that helps you measure the exact amount every time. If you don’t have this kind of spoon with your neti pot, you can weigh the salt. You need 9g per litre of water.

If you don’t get the amount of salt right, or if the water is too cold or too hot, you will irritate the mucous membranes, and the rinsing will be uncomfortable or even painful. The water should have a temperature of 37˚C. That means that the water should be slightly warmer than your fingers.

Ideally, use pure salt (sodium chloride) without added iodine or anti-caking agents, but ordinary table salt is good enough. I recommend using white mountain salt. Use finely ground salt since it will dissolve in the water more quickly than coarse salt. You can use sea salt, but some people can get irritated by it, maybe because of traces of pollen present in it. Salt substitutes should not be used for neti.

You can buy salt made explicitly for nose cleansing in pharmacies. This salt will often include a small amount of bicarbonate, and it is usually expensive. The bicarbonate is a buffer that makes the water more fluid and contributes to the dissolution of mucus. You can also add bicarbonate yourself (about 2ml per litre water), but that is not mandatory, and only a fraction of users do so.

You can also add a few drops of oil in the water to lubricate your mucous membranes. Using a mild oil, like almond oil, is preferable. In this case, add oil in the spout of your pot so that the oil will enter your nose as the water starts pouring out. If you add your oil directly into the main container, it will stick to the sides and never reach your nose at all

In Ayurveda, there are different types of nose cleansing which use medicated water.

Having cleansed your nose, you need to dry it. If you don’t, there might still be water left in the nasal cavity. There are a few simple exercises through which you blow the excess water out of your nose. Should there be water left, it will run out later by itself and, that could be embarrassing.

Read the NoseBuddy brochure for complete instructions on how to do nose cleansing and how to dry your nose afterwards.

How long do you need to meditate to get real effects? What to do if you get frustrated while meditating?