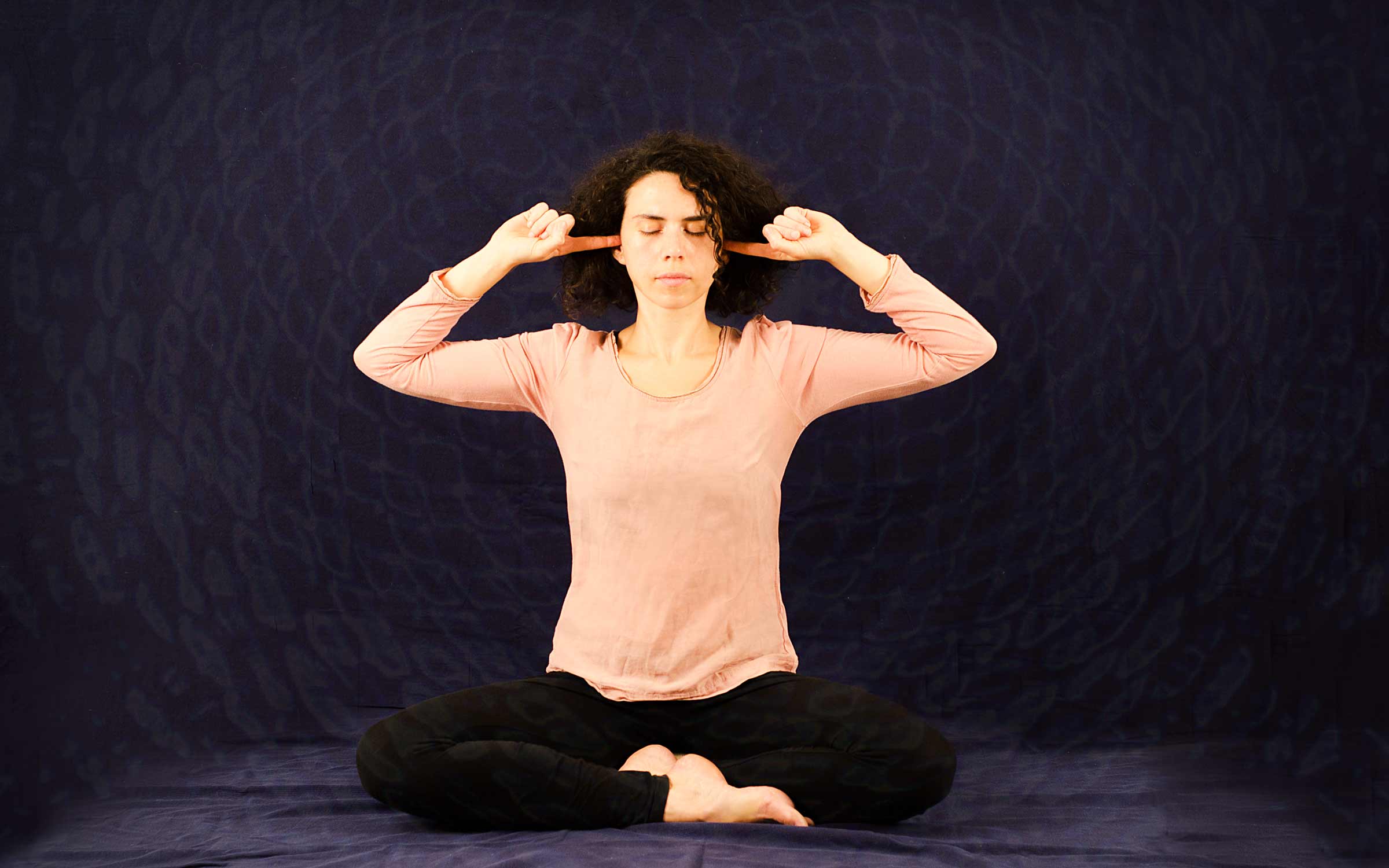 Bhramari pranayama is a breathing exercise where the practitioner closes his ears. While slowly exhaling the yogi then makes a deep humming sound that vibrates in the head. With a bit of imagination, this sound resembles that of a flying bumblebee. This is also what the Sanskrit word bhramari signifies. Depending on how you it, it means either bumblebee or the sound of the bumblebee.

Bhramari pranayama is calming and has many benefits

Through the calm that it establishes, bhramari pranayama allows you to reduce stress, anxiety, nervousness, the feeling of frustration, anger, high blood pressure and migraines. It improves sleep, concentration, memory and the healing of body tissue.

The effect of Bhramari is immediate

The impact of bhramari is immediate. Its influence on the blood pressure and heart rate was evaluated during a study carried out in 2010 by Dr Tapas Pramanik (Department of physiology, Nepal Medical College, Jorpati, Katmandu). During this experiment, he measured these two parameters on a group of 50 volunteers in good health.

First, he checked their blood pressure and heart rate to give a baseline value. Then the participants did bhramari pranayama for 5 minutes in a dry and well-ventilated place. Afterwards, he rechecked his subjects. The results showed a significant reduction of blood pressure (diastolic and systolic) as well as a slight drop in heart rate. This after only five minutes of practice.

When asked about their feelings and sensations after the exercise most subjects testified of an impression of calm and well being. This is confirmes a large number of medical studies showing a link between the way we breathe and emotional states. Pranayama allows reducing the level of anxiety through increased parasympathetic activity in the autonomous nervous system.

Presence of rare gamma activity in the brain

The state of relaxed attentiveness established by a meditation technique is characterised by the presence of alpha waves. This is electrical activity within a band ranging from 7,7 to 12,5 Hz. During a profound meditation, the frequency can go down even further. However, studies show that in certain situations experienced practitioners can generate activity with a rare amplitude in the gamma range that extends from 32 to 100Hz.

In 2009, the j Consciousness and Cognition published another study on bhramari pranayama. In this study examined the activity in the brain during the humming. The results showed that during this phase of the exercise, even for beginners, there was a presence of gamma waves.

Vibrations in the sinuses, the throat and the ears

The humming also has repercussions on the sinuses. Professor Pär Stjärne is the head of the department of Rhinology at Karolinska Institutet in Sweden. According to him the humming sound liberates carbon monoxide from the sinuses. This gas descends into the lungs on the next inhalation. There it helps to dilate the alveoli and thus increase the absorption of oxygen and protecting the lungs from infections.

The humming also relieves tinnitus. This hearing condition hampers the life quality of many people. It can result in concentration problems, depression and or anxiety, sleeping problems and muscular tension. There is no universally effective treatment for this condition, but it can be alleviated thanks to bhramari pranayama. Even people suffering from severe tinnitus can practice this technique. This has been shown by Sidheshwar Pandey, Indian medical doctor and expert in .

A study carried out in 2012 by B.N.Y.S Shankari evaluated the effect of bhramari pranayama on the quality of learning. The aim of the study was to find out if bhramari could influence the learning of mathematics, sciences and social studies.

Other studies had already shown that stress, anxiety and concentration problems interferes with memorisation. Bhramari pranayama allows reducing these effects by procuring calm and by increasing oxygen consumption in the brain.

For 7 days, 65 students between 14 and 15 years old with poor school results participated in this study. The study revealed that adolescents with low attention capacity improved their academic performance following the practice of bhramari pranayama.

Practice bhramari for a harmonious pregnancy

When bhramari pranayama is practice during pregnancy, it helps to maintain and regulate the functions of the endocrine system for a smooth delivery.

According to the Indian Dr Singh bhramari eliminates anxious states and favours the apparition of inner calm and well being. This is beacuse the humming sound stimulates imprtant glands. They are responsible for the autonomic nervous system and for the hormonal system. These glands are the hypothalamus and the hypophysis.

The effects of this practice on pregnant women were explored during a clinical study carried out in 1993 by Dr Sing. He conducted the study at the Monghyr hospital in India, in cooperation with the Bihar School of Yoga. During one year he followed 448 pregnant women. Each one received identical treatment. It including a health examination, dietary education, prenatal training etc. However, Dr Sing asked a group of 112 women to practice bhramari pranayama twice daily for 5 to 10 minutes. The practice was to continue for their entire pregnancy and for some time afterwards. The results revealed the following differences:

Graphic presentation of the results of Dr Sings study

The influence of the humming on the voice and psychic sounds

Several yoga techniques involve making a continuous sound. The sound strengthens and improves the voice and helps to avoid a sore throat. This is a precious tool for musicians. Moreover, bhramari is part of the education of classical Indian musicians.

Bhramari also helps to develop one’s hearing of subtle vibrations. It is an essential preparation to nada yoga as it helps to bring forth psychic sounds.

How to practice Bhramari

The exact way of practising bhramari pranayama varies across traditions. It is typically integrated into a series of other breathing exercises and placed after bhastrika or kapalbhati and surya bheda pranayama but before nadi shodan. You can also practice it as an independent technique.

A beginner can do between 5 and 10 rounds but it is possible to prolong the practice to 15 minutes. To calm extreme anxiety you can go on for up to 30 minutes.

This article was originally written by Mona Bessaa. It was translated to English by Christian Möllenhoff.