What Does It Mean to Be a Swami? A Down to Earth Explanation 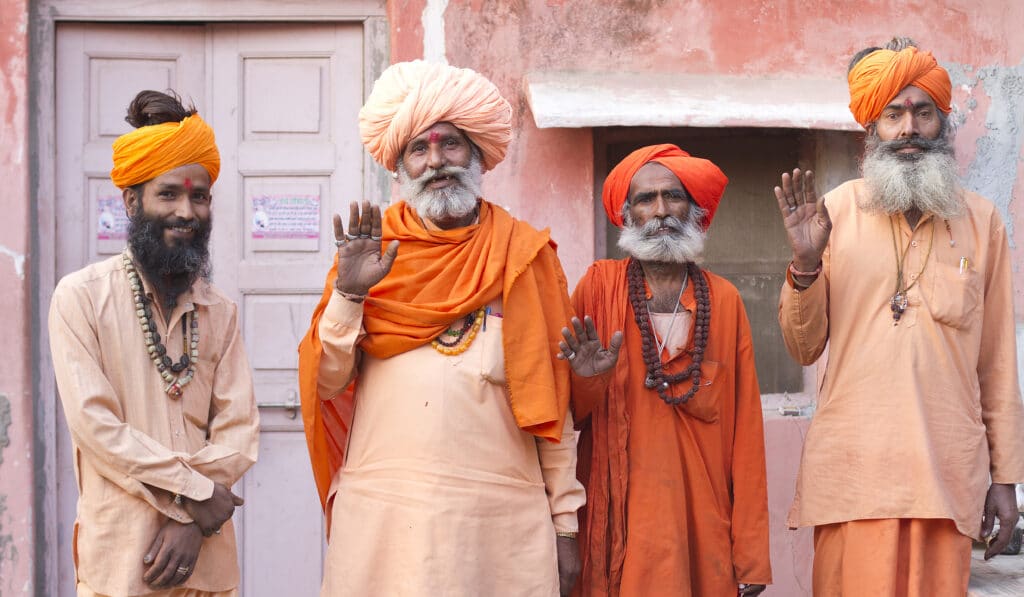 Some yogis are “swamis”. Beginners to yoga tend to equate the swami title with spiritual authority and an evolved state of consciousness. However, it isn’t that simple. In this article, I explain what is meant by the swami title, who can get it and how much it says about the yogi who carries it.

Swami is a title given on initiation into the order of the ten names, the Dashanami Sampradaya. The swami casts off worldly obligations and becomes a sannyasi, a renunciate. The title isn’t a mark of achievement. Instead, it marks the start of a spiritual journey within one’s order.

As a yoga adept, it’s crucial to understand what swamis are. Read on to learn what you can expect from someone who has gotten this title – and what you shouldn’t expect.

The word swami means “one who is the master of his own self”. The female equivalent is called a swamini. Yogis can place this honorific title before or after their spiritual name. For example, my teacher is called Swami Janakananda Saraswati.

When followers of a swami address their master, they often add the suffix “ji”. Saying swami-ji adds additional respect and reverence. When I lived in my teacher’s ashram, I typically called him Swamiji.

In addition to the swami title and a spiritual name, a swami’s full name also contains his spiritual family name. That is their branch of the order of the ten names. Janakanada, for example, belongs to the Saraswati branch. The other branches are Aranya, Ashrama, Bharati, Giri, Parvata, Puri, Sagara, Tirtha, and Vana.

Who can give the Swami title?

Traditionally only a swami in the order of the ten names can give the title to someone else during a formal initiation. However, today yogic groupings outside of this order are using the swami title as well.

In addition, there is an informal use of the swami title, making things still more blurred. To show their respect, people in India tend to address renunciates and yogis as swamis even if they are not formally entitled.

Who can become a Swami?

Anyone who wants to become a renunciate can become initiated as long as an existing swami accepts them. Some swamis are reluctant to initiate new ones, while others do it without restraint. It isn’t unheard of that disciples are made swamis the same day they meet their gurus for the first time. That was the case for the well known Swami Sivananda Saraswati.

I know people who stayed in ashrams in India for just a couple of months before becoming sannyasins and swamis. In contrast, I also know yoga teachers who waited 30 years before asking for initiation.

Before asking to become a swami, it’s wise to be sure about one’s steadfastness. You should also be confident about the intentions of the guru who offers you initiation. It is not socially acceptable in India to first become a renunciate and then go back to ordinary life. Nevertheless, that happens anyway.

Swami is a title given when you begin your life as a renunciate yogi. Therefore it marks at best an honest and profound desire to walk the path of yoga all the way. Hopefully, a swami will grow and acquire knowledge and wisdom during their yogic life. Some may even become awakened or enlightened. But there is no guarantee for that whatsoever.

On the other hand, there are crooked individuals among people from all walks of life, among swamis too. There are plenty of examples of swamis who fail to live up to their vows.

In the yoga tradition there is another honorary title that is bestowed upon those who are thought to be fully awakened. That is the paramahamsa title. Paramahamsa means great swan.

If done by the book, a committee of sannyasi authorities take the decision to give someone the paramahamsa title. However, as you can imagine it isn’t such a straightforward process to determine who is enlightened and who isn’t. Giving someone this title is more often than not determined by internal politics.

When someone becomes a swami, they devote themselves to a life in renunciation of material desires, emotional attachments, power and status. They vow to lead a life in spiritual pursuits.

There are no formal demands on the lifestyle of swamis. It is up to the choice of the individual. This freedom means there are significant differences in the lifestyle and goals among them.

However, there are some common traits. A swami lives a simple life, typically detached, wandering from place to place, without much material possessions. Swamis may also live in ashrams, spiritual communities or alone in secluded inaccessible places.

Traditionally, most swamis live in celibacy. However, that is not the case in tantric lineages. Here ritual sex can be a tool for liberation.

We typically think of swamis as leading peaceful lives. However, in the past, some orders took up arms and organised themselves into military units fighting the Muslim conquerors of India.

Other words for swami

Yogis use many different names and titles.

Baba
The Nagas are a sub-grouping within the order of the ten names. They may be swamis but prefer to be called “babas”. It means grandfather and it’s less formal.

Yogi
Yogis can also use the prefix “yogi” (such as Yogi Maheshwar or Yogi Ghamande). Originally using the yogi title ment that you belonged to a particular order called the Naths. Today it can also signal that you don’t belong to any order but that they are independent.

Sadhu
Yet another word that is closely related is the word sadhu. Sadhus are renounciate yogis. Swamis are sadhus that belong to the order of the ten names, but not all sadhus are swamis.

Guru
In the yoga tradition, teachers and mentors are called gurus. A swami may be a guru, but he can also lead a yogic life without taking disciples or teaching others.

Maharaja
Maharaja means great king. It’s another honorific title that followers give to their gurus in honour of the deep knowledge they posses. It’s usually added after the yogis name.

With all different titles the names of prominent yogis can get quite long. For example the current head of the largest Indian yoga organisation (the Juna Akhara) is called Acharya Mahamandleshwar Swami Avdheshanand Giriji Maharaj.