How Is Yoga Nidra Different from Meditation? – 5 Key Points 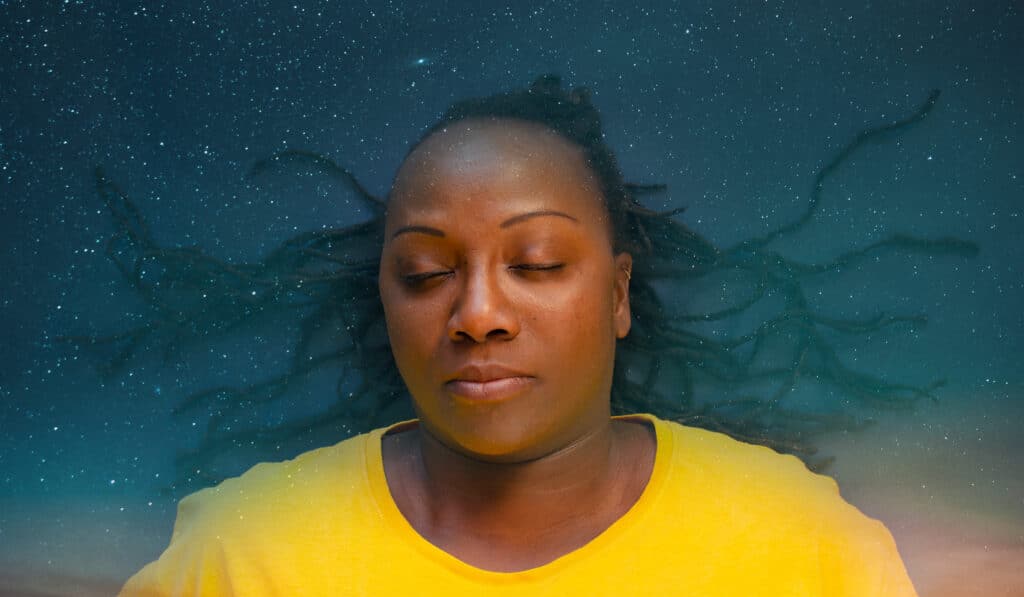 Yoga nidra is a yogic relaxation method. You might wonder how it is different from regular meditation? Meditation is an umbrella term for a wider variety of practices. It isn’t wrong to say that yoga nidra is a kind of meditation. However, it does have some particular characteristics. Here are five crucial ways in which yoga nidra sets itself apart.

The most apparent difference between meditation, as we usually think of it and yoga nidra, is that you do yoga nidra lying down. In yoga, we call this position savasana. It is an essential pose that yogis have used for at least a thousand years.

Practising in savasana is beneficial for beginners. It is more comfortable than sitting in crosslegged classical meditation poses such as the lotus or even the much more accessible sukhasana (easy pose). As a consequence, yoga nidra is beginner friendly.

Lying down has one important implication. You are more inclined to reach the threshold of sleep or even to go beyond it. That brings us to the following unique characteristics.

2. In yoga nidra, you aim at hovering above the threshold of sleep

“Nidra” means sleep. In yoga nidra, you can practice just on the border between sleep and waking. It might even be possible for you to remain aware in dreamy states where you would typically not be conscious.

During yoga nidra, it is common to oscillate between sleep and waking. You will typically not carry out every instruction because you will drift off into sleep. But then you realise it, and you come back to the guiding voice and continue.

I have guided thousands of yoga nidra sessions and just as many meditations. I can assure you that I hear people snoring a whole lot more during yoga nidra than during sitting meditations. As a teacher, I intervene to ensure my students don’t drift too far into unconscious sleep.

When I guide, I want my students to stay at that place just in-between. Scientists call that place between sleeping and waking “the hypnogogic state”. This is the sweet spot for yoga nidra.

I try to keep my students there by ringing my Japanese meditation bell. If that doesn’t help, I touch the sleepy ones individually or gently pull their hair.

Practising in savasana makes our brains inclined to operate in this frequency. However, to get the most out of yoga nidra, we also want to be aware. To bring awareness into our subconscious mind, we need another type of brainwave. We need alpha activity. Alpha happens in the 8-12Hz range. Thus the challenge in yoga nidra is to have enough alpha.

If you are interested, there is a lot you can do to stay more awake in yoga nidra. You can read about it in this post.

Yoga nidra is different from ordinary meditation because it relies on complex instructions to get specific effects. For example, the guide asks you to feel your body and your breath in various ways. You bring forth sensations and progressions of images in your mind. You aim to stay with the instructions and pay no attention to spontaneous thoughts.

The mental instructions you follow out directly impact your state of mind. Images and sensations you bring forth all have a specific effect. Your mind doesn’t distinguish between fantasy and reality. Therefore, thinking about a calm lake or a beautiful landscape tends to induce an agreeable sensation of tranquillity. Bringing a fourth disturbing image will have the opposite effect.

During yoga nidra, different methods activate distinct parts of the brain. Studies have shown that people activate identical parts of their brains as they carry out specific instructions.

I believe that. When I guide yoga nidra, I am sensitive to my students’ states. They bring me along in their practice, and I feel what they feel. When I guide very concentrated practitioners, the visualisations I ask them to bring forth appear spontaneously for me as inner visions. Particular instructions repeatedly trigger the same response in me.

On the other hand, typical awareness-based meditation relies on two simple instructions. First, you have an anchor point. The pioneering meditation researcher Herbert Benson called this the “mental device”. Your mental device can be, for example, the breath or a mantra.

While focusing on your mental device, you will notice anything else coming into your mind and maintain a passive attitude towards it. A passive attitude is the second element of regular meditation. That means that you don’t do anything to influence your thoughts or state. Instead, you notice whatever comes up spontaneously.

4. It relies on guidance

Ordinary meditation can be both guided and non-guided. Typically instructions are so straightforward that most people can practice without continuous instructions from a guide.

Yoga nidra, on the other hand, is tricky to do on your own. You have to follow a long series of complex instructions. To do it independently, you have to learn the instructions by heart.

But that is not all. Even if you know the instructions, you might find it challenging to stay sufficiently awake to guide yourself. You risk going in and out of sleep, thus spending more time than needed. You could also lose track of the sequence or fall asleep altogether.

On the other hand, if you can stay awake, you can get excellent yoga nidra sessions by guiding yourself.

Yoga nidra distinguishes itself from meditation in yet another way: it shares many of its characteristics with western relaxation methods.

Though the word yoga nidra has been used as a synonym for deep meditation (samadhi) for many centuries, the contemporary lying down practice yoga nidra is recent. It was created by the Indian yoga master Swami Satyananda in the early nineteen sixties.

Swami Satyananda says he based yoga nidra on ancient sources, particularly tantric rituals. However, yoga researcher Mark Singleton points out that he also drew on early 20th-century western relaxation methods. Going into details with that is beyond the scope of this post. But I have written an entire article about the origins of yoga nidra.

Yoga nidra has much common with other meditations

As I have shown, yoga nidra has many unique characteristics. It is a valuable method that has a given place in a mix of yoga poses, breathing exercises, open awareness meditation and energy awakening practices. Yoga nidra is complementary to other practices and it can train you to reach deeper states.

A good way to make the distinction between yoga nidra and meditation is to call it meditative deep-relaxation.

You can do yoga nidra at any time as long as you have digested your last meal. However to get the most out of it’s best to do it together with other practices. As you probably can guess, I include this relaxation method in all my sessions here on Forceful Tranquility.